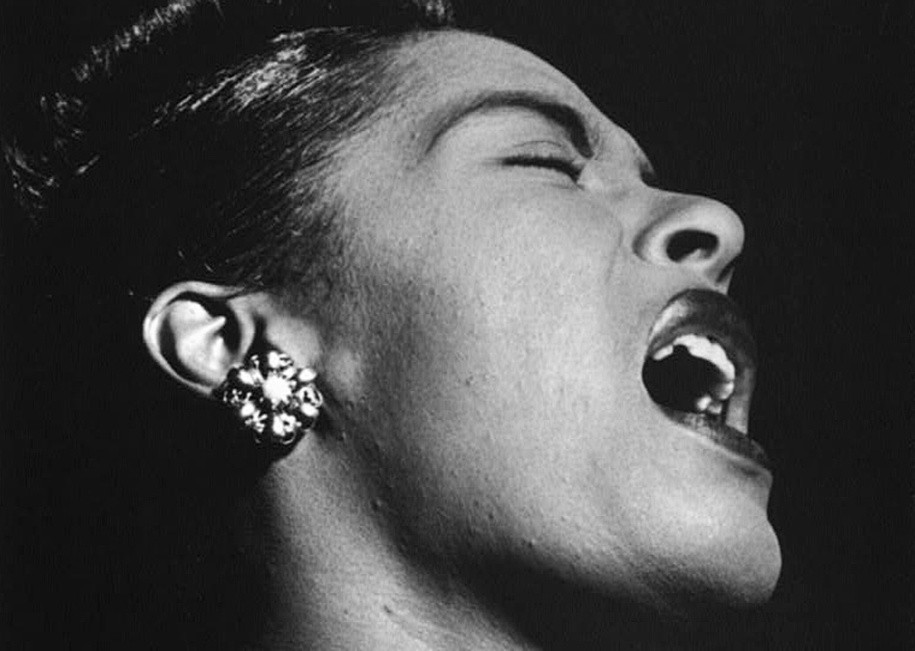 Given the open white supremacist racism and murder of Black folks in the U.S.A. today, Meeropol’s words, and Billie Holiday’s delivery, bring great meaning for new generations of both listeners and performers.

It was in March 1939 that Holiday dropped the emotional song bomb on her Cafe Society audience. Dorian Lynskey sets the scene in his 2011 story “Strange Fruit: the first great protest song.”

It is a clear, fresh New York night in March 1939. You’re on a date and you’ve decided to investigate a new club in a former speakeasy on West 4th Street: Cafe Society, which calls itself “The Wrong Place for the Right People”. Even if you don’t get the gag on the way in – the doormen wear tattered clothes – then the penny drops when you enter the L-shaped, 200-capacity basement and see the satirical murals spoofing Manhattan’s high-society swells. Unusually for a New York nightclub, black patrons are not just welcomed but privileged with the best seats in the house.

You’ve heard the buzz about the resident singer, a 23-year-old black woman called Billie Holiday who made her name up in Harlem with Count Basie’s band. She has golden-brown, almost Polynesian skin, a ripe figure and a single gardenia in her hair. She has a way of owning the room, but she’s not flashy. Her voice is plump and pleasure-seeking, prodding and caressing a song until it yields more delights than its author had intended, bringing a spark of vivacity and a measure of cool to even the hokier material.

And then it happens. The house lights go down, leaving Holiday illuminated by the hard, white beam of a single spotlight.

She begins her final number.

Holiday wasn’t immediately sure her audiences would want to hear the song. “I was scared people would hate it,” she wrote in her memoir, Lady Sings the Blues. “The first time I sang it I thought it was a mistake and I had been right being scared. There wasn’t even a patter of applause when I finished. Then a lone person began to clap nervously. Then suddenly everyone was clapping.” “Strange Fruit” became the centerpiece of Holiday’s set, often performed at the end of the show for maximum effect. As one critic wrote at the time, “The song is by far the most effective cry Miss Holiday’s race has uttered against the injustice of a Christian country.”

Fearing controversy, Holiday’s label, Columbia, opted out of recording the song, so Holiday turned to a smaller label, Commodore, and cut it in 1939. Between its sparse, unconventional arrangement and vivid lyrics, her recording of “Strange Fruit” became a sensation and a hit for Holiday when it was released by Commodore that year.

It’s time for us to take a listen.

The recent release of Lee Daniels’ The United States vs. Billie Holiday, starring Andra Day in the titular role, has reawakened interest in not only “Strange Fruit,” but in Holiday, her life, and her music. Day also won the 2021 Golden Globe Award for Best Actress for her powerful portrayal.

As a side note, I have a personal connection to “Strange Fruit,” through my dad, which I explored in 2008’s “’Strange Fruit’ Revisited.”

As I listen to the song today, I’m thinking also of a different Strange Fruit, the novel by Lillian Smith, which was published in 1944, and then staged on Broadway in 1945.

It was produced and directed by Jose Ferrer, and starred Jane White, (daughter of civil rights leader and founder of the NAACP Walter White) Robert Earl Jones (father of James Earl Jones Jr.) and George B. Oliver, my father.

In hindsight, the controversy that greeted the publication of Lillian Smith’s Strange Fruit in 1944 seems unusually heated today. This novel of interracial love was denounced in many places for its “obscenity,” although sex is barely mentioned.

Massachusetts banned it for a short time; so did the U.S. Post Office. But the book has had many admirers in the years since its publication. It was a commercial success—a best-seller, a Broadway play briefly—and it remains in print in many languages. From her home atop Old Screamer Mountain near Clayton, Georgia, Smith knew that many of her neighbors had bought the book, but in public they snubbed her.

Growing up, I played Holiday’s version over and over, fueling my desire to fight for change. I became active in the civil rights and Black Power movements, and I added Nina Simone’s iconic 1965 version to my collection of “most played” songs.

“Strange Fruit” was a perfect song for Nina Simone to cover. She often brought attention to deeper social issues through her recordings and performances. “[‘Strange Fruit’] is about the ugliest song I have ever heard,” Simone once said. “Ugly in the sense that it is violent and tears at the guts of what white people have done to my people in this country.”

Featured on her 1965 album Pastel Blues, Miss Simone’s take on “Strange Fruit” finds her utilizing solemn, piano instrumentation (one of the sonic hallmarks of the project) in order to throw a thematic, emotional gut punch that still reverberates to this day. Her transformative version employs a minimalist sound palette rather than a jazzy one, forcing you to sit with the heavy imagery and her tangible, grief-filled tone.

Simone is performing as not an artist, but as a human with a visceral connection to the subject at hand. As she plinks away at the keys, she cries out on behalf of her race. Her emotionally-strained voice shudders as she describes a deceased Black body rotting in the sun. As she sings of the body being removed, she wails to the sky, begging for the violence to stop without saying it outright.

As we persist in the fight for justice, amid the modern-day lynchings of George Floyd, Breonna Taylor, Ahmaud Arbery, and so many others, “Strange Fruit” will resonate with ensuing generations. Until we put an end to racial murder—including horrors like we saw in Atlanta this week.

Until that day comes, artists will continue to sing.

Here is a fruit for the crows to pluck

For the rain to gather, for the wind to suck

For the sun to rot, for the tree to drop

Here is a strange and bitter crop

Joe Biden’s relationship with Israel to be examined over Iran