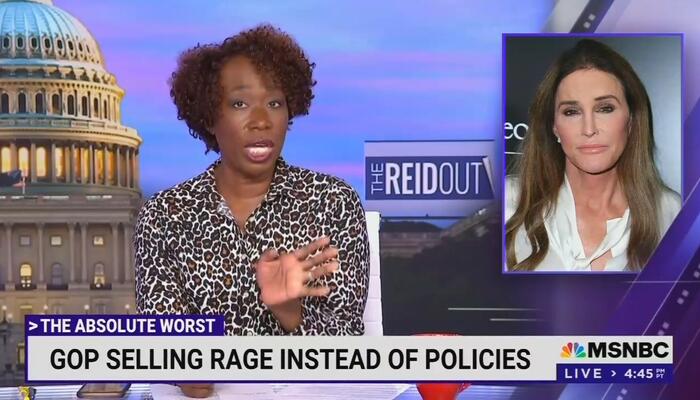 Building on what we saw last week in the left’s hatred for minorities who refuse to be pigeon-holed, Tuesday’s ReidOut added trans people to that group as MSNBC host Joy Reid and Charlotte Clymer melted down over Republican Caitlyn Jenner’s California gubernatorial bid because, in their world, Jenner was a “hypocrite” and “horrible person” who “does not represent the trans community.”

And worse yet, she subscribes to a Republican Party that “sell[s] rage over actual policy” and thus makes her an example of a party that’s “the absolute worst.”

A well-known homophobe, Reid teased this takedown throughout the show, warning she would take on how “conservatives have found some new cultural issues to be outraged” and there were “tales told by idiots full of sound and fury, signifying nothing.”

Talk about irony coming from someone whose entire show has existed to prime viewers to hate those on the opposite side the of spectrum and rage about how they are to blame for what ails the country.

It was in that spirit that Reid began her daily “Absolute Worst” segment with a cartoonish strawman the size of the tallest building in the world that the right is filled with racists who live in fear of Black people and their existence is derived from idiocy (click “expand”):

The Republican Party looks a lot different than it did just 12 years ago, but one distinct feature remains, that seething, foaming at the mouth conservative rage led by a nascent tea party movement enraged over healthcare and by healthcare — and by healthcare, I mean, a black president. Fast forward to now, ObamaCare remains but the tea party, in many respects, got what it wanted, a far right galvanized by the fear of a black president. And of a future where white, cis, straight, Christian men are not the masters of the universe.

And that conservative outrage machine, you see it churning every day on the House floor or in commentaries by Tuckums and his friends at Fox News because keeping their base angry is far more important than actually governing, even if the boogeyman is literally a child. Enter their latest fixation, trans youth who are threatening to take over fourth grade volleyball with a vengeance and by that, I mean they’re not. It’s a make-believe crisis, the Republicans’ favorite kind. But instead of red meat or plastic potatoes, this war has real consequences. Transgender girls, who already feel unsafe in schools, are now facing an onslaught of state legislation targeting them from participating in sports and the justification for kicking these kids off the team? Caitlyn Jenner sums it up.

Reid then played a clip of Jenner saying that, despite being a trans woman, “we have to protect girls sports” because biological men competing in women’s sports “just isn’t fair.”

Instead of considering this contrary view, Reid went into another condescending fit over how the California Republican “does not speak for the trans community.”

Reid’s evidence? Well, Jenner can’t be an adequate trans voice or officeholder because “she is a long-time Republican who’s also a vehement Trump supporter” and thus someone who doesn’t “actually acre about fairness in girls sports, just like they don’t actually care about unborn fetuses” or “affordable healthcare.”

“It’s about forcing the other to exist in their shadow so that they can continue living in a country where their status is protected against all else and that is why the GOP selling rage over actual policy is the absolute worst,” she added.

This carried over into the show’s last segment. As part of a discussion about the supposed greatness of the 1619 Project, Reid lamented to Clymer that “the trans kids attacks sort of almost cut against this need for Americans to feel heroic” and good about themselves.

Going off the same cue cards, Clymer said that it was proof that the GOP “has run out of ideas” after Donald Trump killed a half million people with the coronavirus and instead would go after trans kids “because most Americans don’t know a lot about trans people and trans health care, so they’re just — they’re bullying young trans kids.”

Clymer also made sure to play the race card, stating the GOP was racist and transphobic by always “showing pictures of young, black trans women in high school next to young, white girls, cis white girls.”

A few minutes later, Reid asked Clymer about Jenner to which the trans activist lashed out at the former Olympian as someone either too evil or stupid to know what’s good for her.

Based on Clymer’s use of the labels “hypocrite,” “hateful,” and “Phyllis Schlafly of the trans community,” we’re going to lean toward the former (click “expand”):

REID: Caitlyn Jenner is a — is a strange figure because she was for Donald Trump, and he was, you know, a directly anti-trans President. And now, she is running for governor and has now decided she too is against trans girls playing sports.

REID: I don’t understand it. Within the community, what are people saying and thinking about this?

CLYMER: Listen, every marginalized community has members that work against the equality of that community. It’s — you know, every community has that. For trans folks, Caitlyn Jenner is the Phyllis Schlafly of the trans community. That’s who she is. She has always worked against LGBTQ equality. She has always worked against our interests. So when we saw her throw trans children under the bus and directly attack trans children in that interview, we were not surprised. This is who she is. And by the way, she’s a hypocrite. Just last year, she told trans journalist Don Innes [sic] on her podcast that she had problem with trans kids playing on teams that align with their gender identity. Caitlyn Jenner has played in women’s golf tournaments for God’s sake. This is someone who panders. She is a hypocrite, and — and she is a hateful person who has no problem attacking trans people to build her brand.

This leftist meltdown over a minority refusing to comply with their narrative was made possible thanks to the endorsement of advertisers such as Dove, Fidelity, and Flonase. Follow the links to see their contact information at the MRC’s Conservatives Fight Back page.

Peter Weber Responds to Kelley Flanagan’s Confessions on Their Split